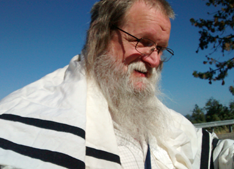 AllFaith.com was created in 1997 under my pseudonym John of AllFaith as part of my studies into the world religions. My quest for God began in 1969 and led me to earn an MA in World Religious Studies, an Interfaith Counseling degree, two Christian ordinations, recognition as an (east) Indian brahman (Vaishnava and Yoga Society), and various other achievements in the religions and spiritualities of the world. Eventually, my prayerful studies lead me to become Rabbi Yoreh Yoreh - Yadin Yadin and to establish Beit Emunah LLC.

LearnEmunah.com was created on August 25, 2018, to house my most current Jewish writings and teachings. I also honored to be a board member of the Jewish Pro-Life Foundation.

Beitemunah.org is the website of Beit Emunah LLC. This is a unique, Sephardic-based, Breslov-focused synagogue that actively welcomes all people of positive intent regardless of religious focus. If there is One God then we are all brothers and sisters, children of the One Creator.

Since 1969 I have devoted most of my energies to diverse religious studies from around the world including Judaism, which, for the past many years, has been my only religious focus. The development and furtherance of emunah (motivating faith in G-d alone), has always been the major focus of my life's work and personal practice. Through voluminous writings and in-depth studies, often hands-on, I have shared my sincere understandings with many thousands of people. My current live broadcasts average 8-10 thousand viewers per stream. I hope you will be one of them.

My teachings may be found on websites and various social media platforms, through personal appearances, radio, and public rallies, via live and recorded broadcasts, and more. I work diligently to encourage baalei teshuva (i.e. marginalized returning Jews) and others to advance in their religious faith in the God of Avraham, Yitzchak, and Ya'akov. It is my conviction that among all the shortages facing our troubled world today, none are as dire as the shortage of emunah. In agreement with the old adage, I believe that "with emunah all things are possible." My personal life is a testament to this as I occasionally share in our broadcasts.

It is my sincere prayer that my humble efforts will help unite our people and bless those who wish to find their way. As my dear brother Shlomo Silverman recently noted to me, "We Jews are not so good at multiplication, but we are the masters of division!" This ought not to be true, but it is.

Concerning Jewish disunity, the former Jerusalem Chief Rabbi, Rav Kook, declared: "Since there are enough people practicing rejection, I choose to practice acceptance." This is my intention as well. Where I may fall short, I ask for your mercy.

As the Chofetz Chaim warned:
Our Sages state: "Jerusalem was destroyed only because its inhabitants limited their decisions to the [letter of the] law of Torah" (Bava Metzia 30b). This seems difficult to understand, for Scripture records many sins of which that generation was guilty.
Had the people overlooked the wrong caused them, then HaShem would have forgiven them as well. However, they were absolutely unrelenting toward each other, demanding from one another whatever they could possibly extract according to the law -- and Heaven judged them accordingly."

ENOUGH! We claim we want HaMashiach and the Third Temple now, and yet we continue doing the very things for which it was destroyed! Both the Orthodox and non-Orthodox are guilty of baseless hatred, hypocrisy, and division. As foretold, the Erev Rav are among us today. We must understand that A Jew is a Jew! Some Jews are religious, others are not. Some Jews are fanatics on both ends of the spectrum, most are not. Let us seek a love-based balance! Especially towards one another. We are a single tiny and ever vulnerable extended family. Let's stand together.

As an untraditionally traditional Sephardic Jew, I am categorized as Orthodox (although the Sephardim have no such divisions). I seek to observe the Way of the Baal Shem Tov, hence I am a "Chassid." As I am particularly attracted to the teachings of his great-grandson, Rebbe Nachman of Breslov, I am a "Breslov Chassid." In this way, I seek to serve HaShem and my fellows as a simple Jew. I also embrace the wisdom expressed by many other sages, both current and past.

Please note that Beit Emunah, LearnEmunah.com, and AllFaith.com are completely independent of the various groups and rabbis I associate with. The views expressed in my offerings are my own understandings and do not necessarily reflect those of anyone else. Likewise, the views of those I associate with do not always express mine. Please refrain from making assumptions about my beliefs and practices until you get to know me. If you have questions, ask me, don't assume. In many ways, I'm not your average Chassid nor rabbi. Heck, I'm not even your average Jew! But then... few Jews really are when you get to know us! Our diversity is among our greatest strengths.

I am a committed Religious Zionist. I have the utmost respect for the work of the late Rabbi Meir Kahana but have no direct association with any of the groups that emerged from him. I have strong opinions concerning the politics of Israel but am not active in politics. ONLY returning to God can restore our nations.

Without supporting the Nation and People of Israel one can not honestly claim to be loyal to our Holy Scriptures, Traditions, Religion, or People in my opinion. Far too many Jews today, even some rabbis (both Orthodox and non-Orthodox), are turning against Israel and thereby betraying the Hope of the Redemption. The Hope of Zion is the bedrock of Judaism and our people. That HOPE is solidly established on Jewish control and governance of our Holy Land AND our collective teshuvah (repentance). Judaism and Zionism can not be separated. They are eternally one. Criticizing the current leadership of Israel is not anti-Zionist. We stand with Israel even as we pray they do better.

Through my many years of religious studies, I have come to respect the practitioners of all religions. I have no issues with those who believe Yeshua (Jesus) was the Mashiach or Christ, nor do I agree with them. We can discuss our disagreements openly and need not reject each other over them. It is still possible for positive-intentioned people to agree to disagree. The same is true with the followers of Islam, Hinduism, Buddhism, Taoism, etc. NONE OF US have all the answers! Let's work together for peace and agree to disagree on the specifics of our doctrines.

My Rabbinical lineage is as follows: Here is a partial list of the Rabbinic blessings I received upon smicha:


Be the Blessing you were created to be
And
Don't let the perfect defeat the good
Site powered by Weebly. Managed by WebHostingPad.com